A Hungarian tattoo artist, Balázs Bercsenyi, created a spectacular stop-motion style art piece. He inked on 70 people, creating a “motion-tattoo” that depicts the life of a rose – the 70 people together create the artwork.

Bercsenyi chose a rose because of its symbolism and how it is a metaphor for love and life itself – reports Kafkadesk.

“It represents the cycle of life when the rose is born and then used as a tool to uplift and inject expression for a human being. The rose is a perfect example of how we should live our lives, to bloom and give our gift away.”

The project started on Instagram, with Bercsenyi sending out a call for submission in Hungarian for his Hungarian followers. 600 people replied to be a part of an unspecified, ambitious project. After that, 100 people got the chance to book a session, but only 70 spots were available. There was only one requirement: “that all applicants had to be native Hungarians.”

a life of a rose

The artist originally from Pécs was part of the famous Bang Bang crew in New York City and is well-known in the body art community. As his inspiration, he listed Kobe Bryant’s short animation film called Dear Basketball. 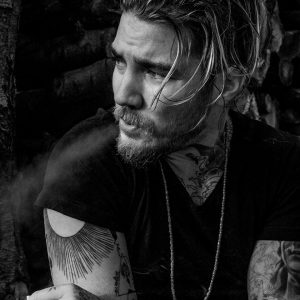 The aim of the project was to create a stop-motion story by doing individual tattoos on 70 different people, in a sort of flipbook animation style. Bercsenyi worked on the project for seven whole days.

“The underlying purpose of this animation tattoo project was to create a sense of oneness, where the lasting outcome is in being part of something that is bigger than the individual.”

The people taking part in the project knew nothing about each other, yet now they will be connected forever.

70 people that didn’t know each other now connected for the rest of their life. Thank you all